How To Improve and Maintain Your Air Quality

It may feel cosy being sealed in tight against the cold in your home during the chillier months of the year, but for people who are sensitive to indoor allergens or have respiratory problems, winter can exacerbate problems. Stale indoor air and heating systems can increase the amount of allergy-inducing dust mites, pet dander, and mould spores circulating through your house. In late winter and early spring, it may still be too chilly to throw open the windows to pull out the musty air, so while you await the warmer weather it’s important to be aware of some of the allergy and respiratory triggers that may be lurking in your surroundings.

“Most of the things that cause problems are odourless,” says Dr Nicholas BuSaba, associate professor of otolaryngology at Harvard -Medical School. “So, in many cases, there’s nothing to alert you to the problem.” That is, there’s nothing other than the symptoms these allergens can trigger – such as respiratory problems (including asthma flare-ups), fatigue and sleepiness, or even digestive issues.

Indoor air quality tends to be worse in the winter months because there is often no flow of fresh air from the outside, meaning allergens stay trapped inside.

Making an effort to improve indoor air quality can help you avoid asthma flare-ups and allergy symptoms and keep you breathing easily through the colder months.

While it’s probably not possible to eliminate all the allergens inside your home, you can reduce the number – and your exposure to them – by making some simple changes. Here are some strategies you can use to improve air quality inside your home and hopefully improve your allergy symptoms.

Keep it clean. A clean house may be a healthier house because good indoor hygiene can greatly cut down on dust and animal dander, says Dr BuSaba. Your cleaning efforts should focus on strategies to reduce the accumulation of pet dander, mould, and dust lurking in your home. Focus on the following: 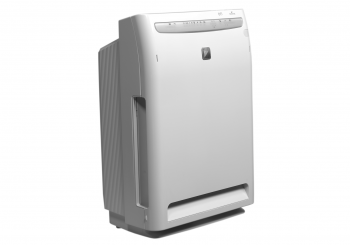 Invest in an air purifier. Research shows that filtering the air can indeed help to remove harmful particles from indoor spaces, particularly allergens, smoke, and mould. What if you’re allergic to indoor allergens and you can’t control the source of the problem?  An example of this could be you have a house pet and you are unwilling to give up your family pet. The practical solution would be to use an air purifier. Placed in the most commonly used areas of the house, these devices, in particular ionic purifiers, can help capture some of the irritants that may trigger your symptoms. You’re probably not going to be able to remove these allergens completely, but you can cut down on them, which may help the problem. A popular purifier is the Daikin Air Purifier MC70LPVM.

Also consider a dehumidifier in damp areas, such as a basement, to help prevent the growth of mould. Ensure that bathrooms, another potential source of mould, are well ventilated as well and scrub off any visible mould that collects in the shower, on fixtures, or walls.

Keep the greenery outdoors. In-door plants are pretty, but they can also collect and foster the growth of mould. So, if indoor allergens are a problem, you’ll want to avoid them.

While some plants are touted as helping to improve indoor air quality because they release oxygen, they are still allergy triggers for many people. On balance, they can create more problems than they help.

Change your filters. If you have a forced-air heating system, be certain to change the filters regularly. Electrostatic filters can help ensure that dust and other airborne irritants get trapped instead of being recirculated throughout your home.

Also, consider having your ducts cleaned to remove trapped dust. This may not always be advisable, but it helps in some cases. The Department of Industry, Science, Energy and Resources has a great rating system for all type of air conditioning systems called Energy Rating.

Let the fresh air in. Even in the cold months, open windows from time to time to allow fresh air to move into the house. Also, move potential air contaminants out by using fans in the kitchen to remove cooking fumes.